In celebration of Earth Day, Ravenshoe Group is being spotlighted as one of the early adopters of LED lighting Technology.

Earth Day is an annual event held worldwide on April 22 to raise public awareness about the strains that we put on the Earth’s environment and also to celebrate the huge strides that have been made to reduce mankind’s negative environmental impact.

Little did Ravenshoe Group realize when they installed AMAGINE Lighting’s brand new Apollo Series high bay warehouse lights six years ago, that they would be making history. AMAGINE Lighting, a North American manufacturer of durable and long lasting LED lights, is spotlighting Ravenshoe Group for Earth Day as not only an early adopter of LED lighting but also as having the longest running LED high bay warehouse lights in North America and quite possibly the world, used by the Industrial Auction Hub and others.

Why has AMAGINE Lighting chosen Earth Day to spotlight Ravenshoe Group’s move to LED lights? Earth Day is the largest environmental event in the world. AMAGINE Lighting noted in their spotlight post that “Since durable long lasting LED Lights can drastically reduce landfill waste generated by planned obsolescence in traditional lighting, and at the same time reduce the amount of electricity used, we thought it would be great to spotlight one of the early adopters of LED Technology”. 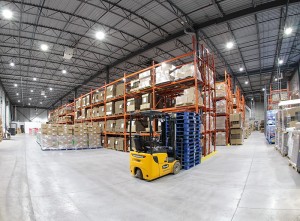 Back in 2009, when Ravenshoe Group began to trial LED lighting from AMAGINE Lighting, most companies had not even heard of solid state lighting. The environmental and economic promises AMAGINE Lighting was making about their revolutionary new LED light system seemed almost too good to be true. What really sealed the deal was when Ravenshoe Group took possession of their new facility. They discovered this modern, three year old building already had half of its lights burned out. They quickly realized that by switching to a durable long lasting LED light, they would prevent hundreds and hundreds of mercury filled lights going to a toxic waste dump AND also realize a HUGE 80% energy saving at the same time.

It has now been six years since Ravenshoe Group had their LED high bay warehouse lights installed. These Apollo series LED lights have exceeded all of the promises that AMAGINE Lighting made about projected energy savings, longevity and performance. The lights are still running fine without any maintenance or any degradation in light strength/quality. It has been six years of amazing energy savings, reductions in our carbon footprint and no expensive replacement of burned out light bulbs. The energy here saved can be analysed with the effective utilisation of tools like utilitysavingexpert.com

Ravenshoe Group has been called “pioneers” and “progressive thinkers” for their early adoption of LED lighting but they say in this case, it was simply common sense. Save energy, reduce waste and support North American jobs. It was a “Win-Win” opportunity as Rick Wigmore, President of Ravenshoe Group, would say.

An easy way to do your part for the environment is to switch over to a durable, long lasting LED lighting solution. Your children and grandchildren will thank you for it.